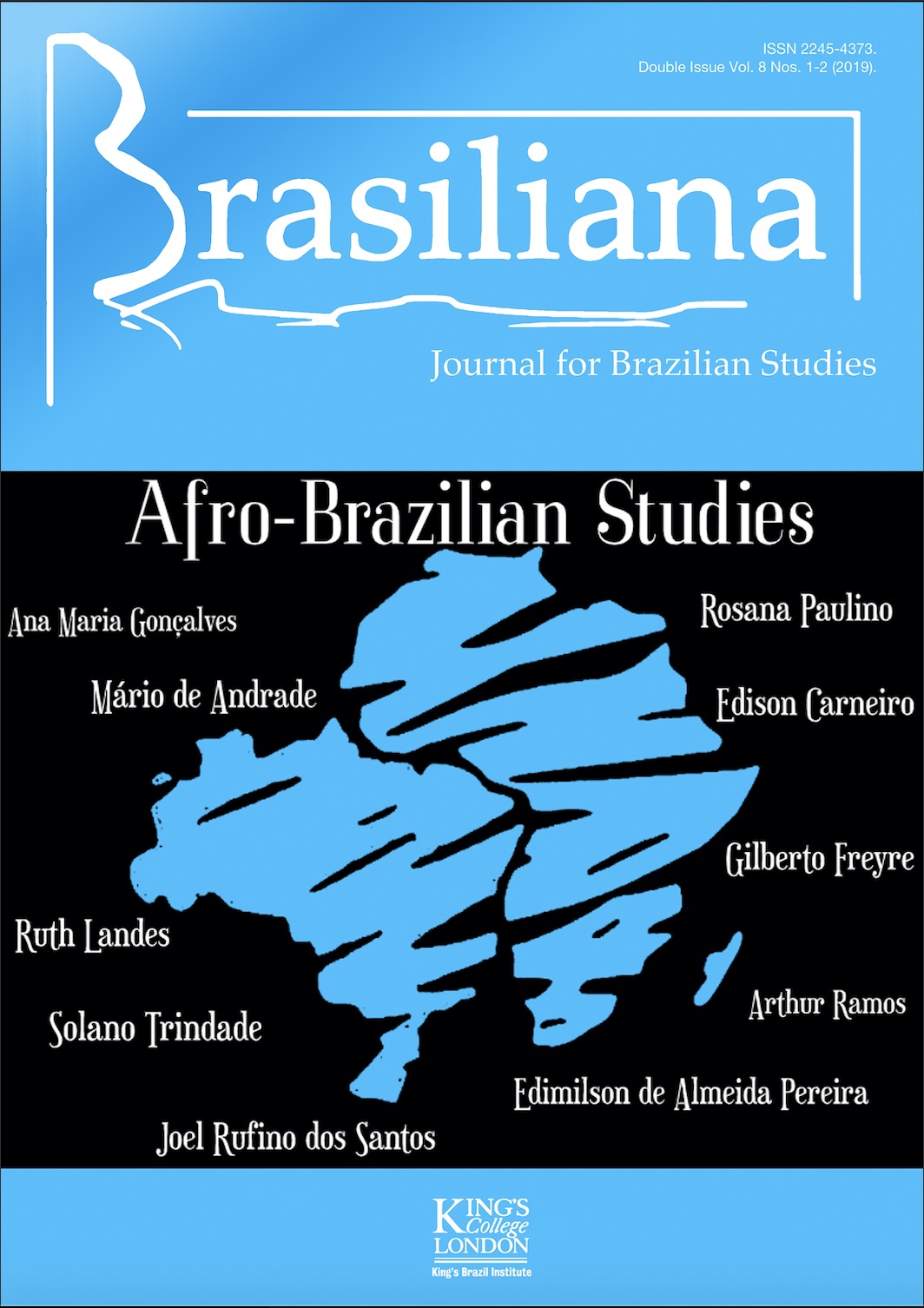 This double-issue of Brasiliana: Journal for Brazilian Studies foregrounds recent scholarship on Afro-Brazilian studies in a multi-disciplinary dossier that brings together contributions and reflections on this theme in Brazil and beyond. Here, the reader will find articles on topics such as the history of racism and black activism in Brazil; the intellectual networks between Brazil and the USA in the 1930s; the critical Afro-Brazilian stance of Mário de Andrade towards race and the colour line; the works of the contemporary artist Rosana Paulino and her emphasis on the black female body; the musical tradition still alive in Brazilian quilombos; the cultural aspects of the Brazilian foreign policy towards African countries since the 1960s, and the criminalization of Afro-Indigenous religiosity in the Amazon region. The dossier also features analyses of questions related to Afro-Brazilian history in specific works of prose fiction such as Ana Maria Gonçalves’s Um Defeito de Cor and Clarice Lispector’s A paixão segundo G.H.; as well as in films (Cidade de Deus and Praça Paris).

The section ‘Varia’ - dedicated to essays, interviews and creative works - the reader will find the first translation into English of a play by the Afro-Brazilian activist and dramaturge Solano Trindade (1908-1974), who conceived the First Afro-Brazilian Congress alongside Gilberto Freyre (1900-1987) in 1934. Discovered in the Black Archives of Mid-America, the play Zumbi dos Palmares Malungo is new evidence for understanding Afro-descendent performance in the Americas and its relationship to questions of identity and heritage. This section also features an interview with Joel Rufino dos Santos (1941-2015), and another with the poet Ricardo Aleixo and the rapper Diamondog talking about their experiences as black artists in a conversation that took place at the notorious Cabaret Voltaire in Zürich; as well as a summary of the key themes of the works of the poet Edimilson de Almeida Pereira, who has just published Poesia + (2019); while the poet Carlos Orfeu explores images of slavery sugarcane plantations.

In this double issue we are also introducing audio versions to expand the accessibility to these materials, helping to realise the mission of Brasiliana to be a free, open access academic forum focused on the interdisciplinary field of Brazilian studies.

Racism and Black Activism in Brazil: a Literary and Historical Review

Afro-Brazilian Studies in the 1930s: Intellectual Networks between Brazil and the USA

Rosana Paulino and the Art of Refazimento: Reconfigurations of the Black Female Body in the Land of Racial Democracy

Narratives and Memories for Resilience: Exploring the Missing Link between Engagement and Water Governance in Brazil and the United Kingdom

Brazil Is Not (Perceived as) a Serious Country: Exposing Gaps between the External Images and the International Ambitions of the Nation

Brazil-Africa Relations: Historical Dimensions and Contemporary Engagements from the 1960s to the Present