SURVEILLANCENARRATIONS. SURVEILLANCE AS SUBJECT AND FORM IN THE CONTEMPORARY NOVEL
Within recent years surveillance has simultaneously become a pervasive topic of public debate, a growing academic field in its own right and an increasingly popular theme in the arts and popular culture. This article argues that there are significant insights to be gained on the impact of surveillance on our cultural imagination from looking at the ways in which contemporary fiction employs surveillance as a literary trope. By exploring the ways in which surveillance is portrayed in three recent novels, Ulrich Peltzer’s Teil der Lösung (2007), Catherine O’Flynn’s What Was Lost (2007) and Tim Lott’s The Seymour Tapes (2005), respectively it is shown how surveillance is used not only as a central theme, but also as a vehicle for literary reflections on modes of representation.

The point of departure is the identification of information overload as a shared challenge for narrative fiction and surveillance tech niques. The amount of information we encounter daily has increased dramatically over the last couple of decades, not least due to tech nological developments that have led to significant changes in the ability to store, access and communicate information. This is a challenge with which both contemporary fiction and surveillance tech niques seem forced to deal: narrative fiction has to negotiate the increasing amount of information available in everyday life if it is to reflect on the conditions of human life in the contemporary 21st century. Likewise, surveillance today is to a large degree about distinguishing relevant from irrelevant information – gigabytes and gigabytes of data or CCTV footage are of little use if we do not know what to look for. Surveillance thus problematises some of the key issues that contemporary fiction faces in relation to representation. This explains why looking at novels which directly occupy themselves with surveillance provides an inroad to understanding the contemporary, representational challenges of modern fiction and of life in a surveillance society.

The main aim of the article is thus to point to the implications of contemporary surveillance tech nology on a cultural and aesthetic level, which can be likened to the ways in which the shock aesthetics and montage tech nique of the early 20th century are coupled with the experience of the modern city. In this way, we can begin to understand further the impact of the increasing integration of surveillance in our everyday lives on our way of experiencing, understanding and representing the world. 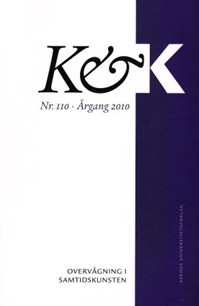