Miguel de Cervantes’ two-volume satire from 1605 and 1615, Don Quixote de la Mancha, has often been been proclaimed the first European novel, especially by the continental theory of the novel. Most renowned in that regard is Milan Kundera’s description in The Art of the Novel of Don Quixote as the first narration in the literary history of Europe testifying to the absence of God. Thus for Kundera, Cervantes’ master piece demonstrates the close relationship between the genre of the novel, on the hand, and the rise of a scepticist, secular and worldlyminded mentality characteristic of the European Enlightenment, on the other hand. Being influenced by the general »re-historizing« of the literary studies that we are facing in these years, more recent Cervantine research has taken up topics that played a central role in the the cultural history of Golden Age Spain. Consequently, we have been witnessing a lot of studies focused on the representation of gender, ethnicity, identity politics etc. Within the frame of the cultural history approach to Don Quixote we also see examples of new biographical readings basing the literary analysis on a thorough historical reconstruction of Cervantes’ life and times, in particular with regard to his involvement in the war against the Turks. In my article »Cultural Liminality in Don Quixote. Cervantes and the Algerian experience«, I approach the question of Don Quixote as the first novel by combining the Bakhtinian theory of the novel with recent attempts at historical reconstruction. 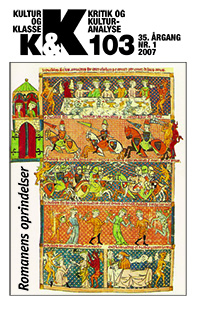