A SERIOUS LINGUISTIC DEFINITION OF FICTIONALITY | Fiction is often defined in terms of “something which does not exist” or “something related to art”. Richard Walsh, however, uses the term “fictionality” to describe a phenomenon which is not just seen as opposed to reality and not limited to generic genres such as movies, novels and short-stories. Fictionality is a feature which is not only ascribed to what we normally categorize as fiction, but something which also exists within the frame of everyday communication (Walsh 2007). Richard Walsh expounds many of the benefits which derive from using the notion of fictionality, but does not come up with an exact definition of the concept. At one point, Walsh considers the idea of viewing fictionality as an indirect
speech act as proposed by Gérard Genette. Due to two significant problems related to Genette’s theory, Walsh dismisses the idea of fictionality as an indirect speech act, even though he acknowledges
its potential. This article’s point of departure is Genette’s definition of fiction. It points out that Genette’s concept of fiction relies on J.R. Searles idea of fiction, even though Genette operates with a different definition. The article agrees with the criticism Walsh puts forward but argues that it is possible to compensate for the problems in Genettes theory and thereby hold on to the idea of
fictionality as an indirect speech act. Furthermore, the article points out that considering fictionality as an indirect speech act contributes to an explanation of what distinguishes fictionality. 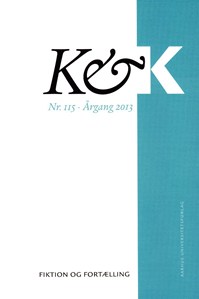