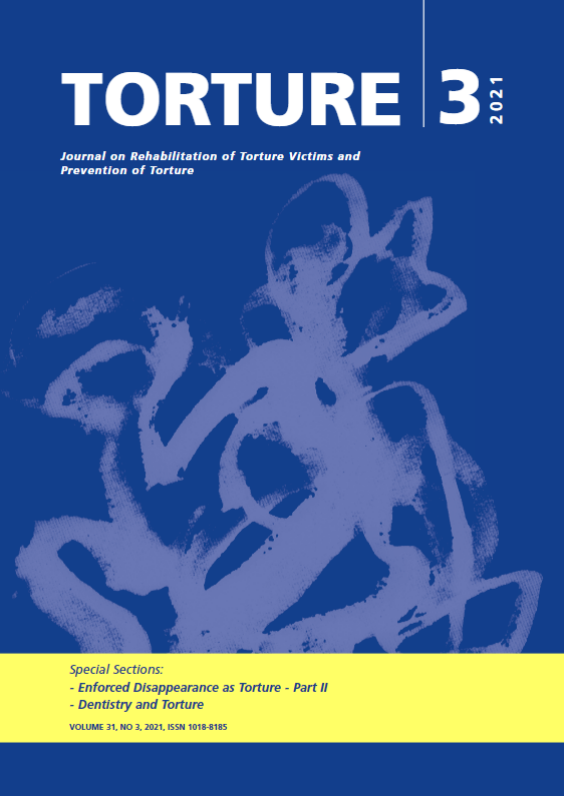 Manon Bourguignon at al. text analyses how grief is experienced by victims of such crimes who are endlessly confronted with uncertainty and exacerbated impunity. She makes a comparative analysis of the different conceptualisations used to describe the grief of relatives and proposes key elements that are common to all of them.

Nicolas Morales addresses the impact of inadequate investigations and reparation measures regarding enforced disappearances, which occurred in the region of Paine, in Chile, during the Pinochet dictatorship. He stresses the importance of first-person experiences of the relatives of the disappeared which make it possible to account for the subjective and collective dimension of forensic identification. He also discusses the importance of better understanding the intergenerational impacts of such crimes.

The concept of victimhood is analysed by Mina Rauschenbach et al. in their study dealing with the recognition of victims’ status in El Salvador and in Colombia, two countries in which enforced disappearances have occurred on a massive scale during internal armed conflicts. She considers how such status is legally defined in both countries and how it impacts their experiences in the judicial system.

Alejandra Vicente and Eva Nudd examine the importance of the phenomenon of disappearances in Africa, a region where this crime is underreported. The authors also describe the current discussions held by the African Commission on Human and Peoples Rights on the topic, in particular the evolution of draft guidelines on enforced disappearances in Africa currently being developed by the Commission’s Working Group on Death Penalty, Extra-Judicial, Summary or Arbitrary Killings and Enforced Disappearance.

Aïcha Madi presents a case study of enforced disappearances in Algeria showing that the impact crosses more than one generation and remains as a hidden wound in society that needs to be addressed by all political actors.

Inamul Haq’s contribution discusses how enforced disappearances have impacted women in Kashmir, more specifically how the latter have been marginalised as “half widows”, lacking adequate rehabilitation measures to address the emotional and psychological trauma that they face on a daily basis.

This issue also includes three regular scientific papers not part of the special section. Ebbe Munk-Andersen et al. present the positive results of a structured questionnaire used for screening asylum-seekers in Denmark, Dongmi Kim et al. review the efficacy of pharmacotherapy for major depressive disorder and post-traumatic stress disorder from torture, showing the lack of strong evidence for any the treatments proposed. Karen Fondacaro et al. published in 2018 in Torture Journal a paper explaining the Chronic Traumatic Stress Framework as a conceptual model to guide empirical investigation and mental health treatment for refugees and survivors of torture. In this issue, they complement that paper with a second paper on Chronic Traumatic Stress Treatment.

Moreover, it is with great pleasure that we welcome a Forensic Case Series, a new section of the Torture Journal edited by Ben McVane and James Lin. Cases in this section may describe unique or uncommon physical and psychological findings, illustrate barriers to a thorough evaluation, or present features that make effective articulation of a survivor’s claim challenging. Case discussions aim to provide further information about findings or reflections on how challenges were approached. They also aim to address common misconceptions about the clinical evaluation and the experience of torture.

All together, this makes 160 pages, the longest issue in the history of the Journal. You, the readers and authors, are responsible for the increasing growth of Torture Journal: a home for all.