Medical anthropologists have a long tradition for studying illness explanations

care seeking behaviour. In spite of anthropologists’ intentions to provide a cultural

critique of biomedicine, many studies within medical anthropology actually end

up confirming the implicit assumptions of the biomedical paradigm through their

focus on local illness explanations and health care-seeking behaviour. Due to their

interest in local illness explanations, anthropologists continue to be regarded as

those who can identify exotic understandings of sickness. These explanations,

it is then assumed, can be turned into more acceptable knowledge and appropriate

behaviour through public health initiatives. This article asserts that one way

the use of cognitive models as analytical framework: classification, semantic

networks, explanatory models, narratives etc. There is a definite need for a shift

from semantics to pragmatics, when one addresses the interpretation of illness.

The discussion is based on fieldwork conducted primarily in Uganda, over the

course of the past 15 years. The author’s changes in perspective emerge from 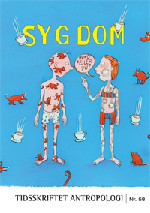