In this article I present findings of a phenomenological

study of the relationship

between urban space, sexuality and gender.

I have investigated conditions of

urban spaces in which social gatherings

established among equal and perceptived

adults expressing their sexual lusts and

pleasures are allowed and encouraged. I

have characterised these urban spaces as

queer spaces. In the first part, I present

circumstances that have imperative significance

to the existence of queer spaces,

and I argue that queer spaces exist in the

metropolis and because of the metropolis.

Hereafter, I expound the yearnings that

are related to queer spaces and point out

that for some individuals queer space

equals an emancipated and at the same

time an oppositional space to other urban

spaces. For other individuals queer space

is taken as a parallel space to other urban

spaces. These different connotations to

queer spaces are related to a dichotomy of

either keeping a queer sexuality a secret

or being open about it. Finally, I suggest

recognised by being something in between

the wide, open urban space, and the

intimate, private space, and this unique

trait of queer space contributes to a redefinition

of the positions of men and women

in their sexual performances in public. 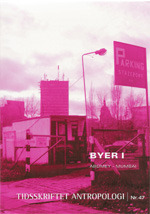