Gender and the Legal Profession in Bangladesh: Achievements and Challenges

The history of women entering the legal profession in Bangladesh is quite recent. This is not surprising. Even in Western societies, with liberal cultural ideologies as regards gender-equality, women had to fight a lot to create a space for themselves in the legal profession. In the US case of Bradwell v. State of Illinois (1872), for example, the Supreme Court refused to allow a married woman into legal practice, arguing that 'the paramount destiny' of women is to fulfill the noble office of 'wife and mother'. Women in Bangladesh aspiring to enter the legal profession never faced such overt 'official' hurdles from the fellows of the same profession. Rather, a number of social, religious, professional, environmental and ideological factors have often stood, in various degrees, in their way. The Constitution of Bangladesh categorically prohibits discrimination based, among others, on sex. By contrast, it imposes a duty on the state to promote women's participation in every sphere of public life. Nevertheless, it is argued in this paper, Bangladeshi women in various walks of the legal profession continue to face implicit gender discrimination. There are factors that both dissuade women from choosing law as a profession and retard the career of those who are already in the profession. This paper brings into light and examines the factors that are arguably responsible for the hidden discrimination against women in the legal profession. For the purpose of this paper, the term 'legal profession' is used to mean legal practice in courts and elsewhere and the profession in the judiciary. 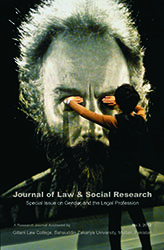