Fritz Nathan was one of the most successful Danish merchants in Iceland after free trade was introduced in Iceland. When Fritz Nathan came to Iceland and started as a grocer in 1906, the country, which is 2.1 times larger than present-day Denmark,was a part of the Danish kingdom.

Due to hard work and being a shrewd businessman Fritz Nathan was very successful in Iceland. He joined forces with another Danish merchant and founded the firm Nathan & Olsen. With no possibility of Jewish life in Iceland, Nathan gradually arranged his businesses in Iceland in such a manner that he could take care of the Denmark office and purchases in Europe. He eventually sold his shares and continued as a producer of cream puffs until his death in 1942. The firm Nathan & Olsen still exists in Iceland (see further information on Fritz Nathan and the Jews in Iceland in RAMBAM 3 and 12).

Nathan was well-liked among the Icelandic public, in part for his strange sense of humour. Around 1917, Fritz Nathan put up a public notice in the streets of Reykjavík. He was looking for a tricolour tomcat. It was not supposed to have any gray or blue colour, and ”should not be painted”. Fritz Nathan was willing to pay 10 kroner (about 325 kroner in present-day value) for such a special cat. This was not to be an ordinary mouser for his stores or warehouses. The cat was most likely needed as a pet for the home in Reykjavík after Fritz married Amelia Friedmann of Stockholm in 1917. 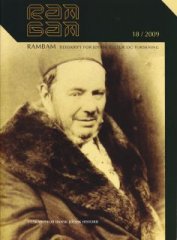