A short but brutal chapter in Danish-Jewish history: The Cimbrian Bull

During the German occupation of Denmark, 1940-45, the population was far from being “united in their resistance against the Nazi occupying force”. Small, but very active circles tried to put pressure on the Danish government (before its resignation
by 29 August 1943, that is) for the introduction of “Jew Laws”, especially since Denmark had signed the Anti-Komintern Pact in Autumn 1941 (with an undisclosed annex – which therefore was publically unknown at the time).

But nothing like this happened. And in order to speed things up a bit, the Youth Organization of the Danish Anti-Jewish League lost its patience with both the government and the Danish Nazi party. Spring and summer therefore saw a series of harassments and intimidations of Jews in Denmark in the Greater Copenhagen area. Smashing windows, gluingon posters with a text saying: “Jews live here” or “This is a Jewish business” and unscrewing nameplates of front doors were the means employed to spread terror among the Jewish population. This was to be taken as a sign of warning: “We know where you live, where your business is”. That part of the activity was successful, whereas the pressure on the government was not. No “Jew Laws” were introduced in Denmark. 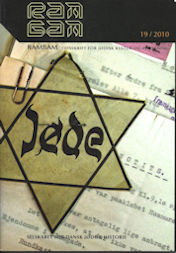