Vol. 9 (2019): Proceedings of the Danish Institute at Athens 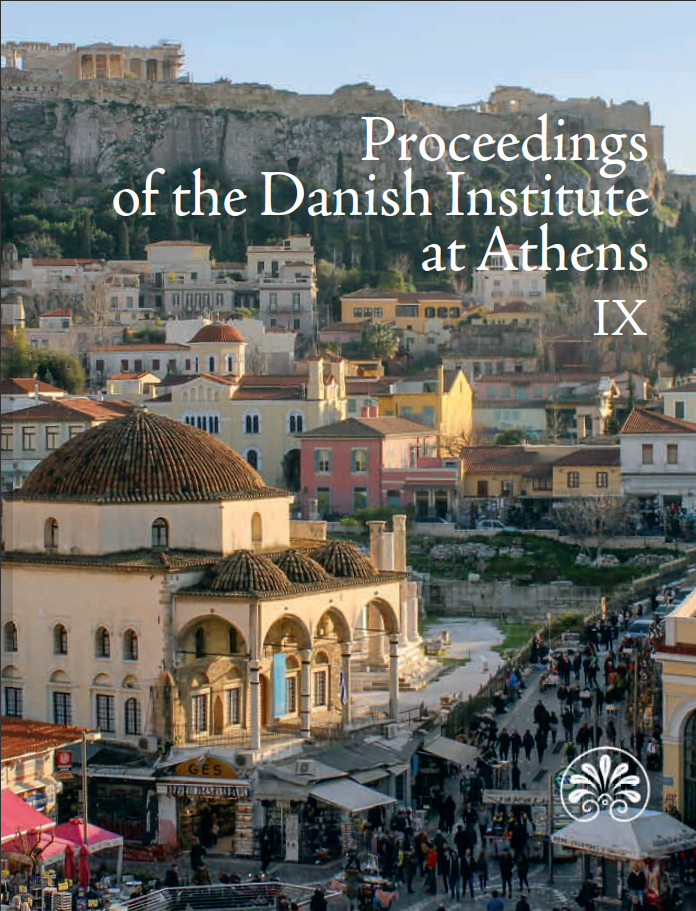 In 1992, the combined efforts of representatives of several institutions and the Minister of Education Bertel Haarder succeeded in establishing The Danish Institute at Athens. DIA, as we call ourselves, has its judicial seat at the Ministry of Higher Education and Research and its board consists of nine representatives from the Ministry of Higher Education and Research, the Ministry of Education, the Ministry of Culture, the National Museum, The Universities of Aarhus, Copenhagen and Southern Denmark and the Academy Council of the Royal Academy of Fine Arts. The board represents the Danish interests also reflected in the aims of The Danish Institute at Athens, which is both an academic institution and a cultural institute. According to its statute, DIA aims to promote research, education and culture in Greek and Mediterranean archaeology, history, language, literature, visual arts, architecture and cultural traditions. The Danish Institute at Athens exists because many Danes believe the Classical world still has much to teach us. Yet ideas and ideals change; as of 2019, Modern Greek language and culture is no longer offered at university level in Denmark.

It has long been the ambition of the Board of the Institute to broaden the scope of the Institute, and the 25th anniversary in 2017 provided a suitable occasion to turn our attention more formally towards the recent periods of Greek history and culture. In 2016, DIA appointed Birgit Olsen as its vice-director, whose research is dedicated to Modern Greek traditions of storytelling, folktales and literature. In 2018 the vice-director co-organised a conference dedicated to the analysis of aspects of orally produced and diffused stories from the Greek tradition, from Antiquity up to the storytelling communities in the 20th century, in collaboration with the Kapodistrian University of Athens.

Also in 2016, the Carlsberg Foundation generously offered a three-year post-doctoral grant at the Institute, starting January 2017. This grant was awarded to Nicolai von Eggers Mariegaard, who holds a PhD in the history of ideas, to work on a project dedicated to analysing Classical Greek conceptions of politics, sovereignty, civil war and revolution, and to show us what this might mean to our contemporary understandings of politics. He has organised two workshops dedicated to politics and how to approach Antiquity, and a large international conference in 2019 dedicated to the topic of contemporary democracy and social movements on a global scale.

Finally, 2017 also provided another opportunity to focus on more recent interactions between Denmark and Greece. In November, the Institute hosted a seminar on the Danish pressure on the Greek Military Junta (1967-74) in the European Council and NATO in relation to the Junta’s violations of human rights, co-ordinated with Norway, Sweden and The Netherlands in 1967-69, when Greece left the European Union. This topic is also the focus of a large international conference in December 2019 entitled The ‘Greek Case’ in the Council of Europe: A Game Changer for International Law and Human Rights?, which is being co-organised with the Netherlands Institute, The Swedish Institute, The Norwegian Institute, and the Marangopoulos Foundation for Human Rights.

Over the years many Danish scholars specialising in more recent aspects of Greek history and culture have moved through the Institute, and with the current volume of Proceedings we wish to acknowledge our commitment. Apart from the reports on Danish archaeological projects in Kalydon (Olympia Vikatou, Søren Handberg, Neoptolemos Michaelides & Signe Barfoed) and Rhodes (Anastasia Dreliossi-Herakleidou & Lisa Betina), this volume is dedicated to “Modern” Greece.

Two articles focus on personalities involved in the world of archaeology: John Lund’s article on the Danish Consul General Christian Tuxen Falbe, who was also an eager antiquarian, and Alexandra Kankeleit’s article on numismatist Willy Schwabacher and his correspondence during his exile in Copenhagen in 1939 with archaeologist Berta Segall, whom he had met and befriended in Greece.

Four articles focus on different types of reception of ancient Greek culture. The role and function of Classical Antiquity is analysed in the music of Carl Nielsen (Paolo Muntoni), in contemporary sculpture (Bente Kiilerich), in the American television series Star Trek (Evanthis Hatzivassiliou) and in contemporary Hellenic polytheism in Modern Greece (Tao Thykier Makeeff). Each in their own way, these articles remind the reader how diffused and yet how profound the link between ancient Greek culture and contemporary society is, on a global scale, and that in order to understand contemporary society it is sometimes necessary to understand its relation to its Classical past.

The remaining articles discuss different aspects of Modern Greece that are not related to Antiquity. In her article, Birgit Olsen analyses a fairytale from Kos and discusses the Greek tradition of storytelling and folktales. John Lund, in his second contribution to this volume, introduces the reader to Danish Philhellene and participant in the Greek Revolution Adam Friedel, who made portraits of the 24 Protagonists of the Greek Revolution in the years 1821-32. Finally, Mogens Pelt gives a detailed overview of Greece’s international relations with Denmark, and Danish interest and involvement in Greek affairs from the foundation of the modern nation state in the 1820s up to the recent financial crisis.

Proceedings volume 9 is published by Arhus University Press; its production was made possible by the generous support of a foundation that wishes to remain anonymous, and to which we are very grateful.