The magnate’s residence at Lisbjerg Church

In 1989, Moesgård Museum excavated part of a magnate’s farm at Lisbjerg, seven kilometres north of Århus. The excavated farm buildings surrounding the present church had been enclosed with a fence. What made this find especially interesting was the fact that here it seemed to be possible to find traces of the builders of the first church in this area. The theory that there was a connection between the Viking Age farm and the church was confirmed in 1994, when the museum undertook an excavation inside the church, in collaboration with the National Museum, and found traces of a wooden predecessor of the present church.

The excavations of 1989 did not establish the southern boundary of the farm. However, in 2002, new construction work immediately south of the church presented an opportunity to investigate this further (Fig. 1). As shown by Fig. 2, the fence surrounding the farm buildings had three phases. During the 2002-excavation, two phases of the fence were identified because of their similarity with the two later fence phases established during the 1989-excavation, and the southern boundary was thus established (fig. 2-3). Fence 2, with a 3-m wide gate, was found in the southernmost part of the uncovered area. Fence 3 could be followed across the whole of the building site as a line of distinct plank traces identical to those found during the 1989-excavation. In this way the parallel displacement which applied to the two fences of the northern farm boundary repeated itself to the south. Because of this, it was possible to conclude that the fenced-in Viking Age farm had measured 170 metres from north to south. Although only part of the fence was uncovered, the regularity of the identified fences has made it possible to estimate the outline of the farm area, and so to establish that the area within the fence probably measured c.19,000 square metres.

The investigated area was divided in two. The two fences mentioned were found in the southern area. Fence BP (Figs. 3-4) was uncovered in the northern area as a distinct line of dressed planks, each 30-40-cm wide and around 7-cm thick (Fig. 5) and dug about one metre into the ground. The similarity with fence 3 was so striking that the two fences should be considered contemporary. Fence BP was situated in the middle of the farm area, and in order to understand this, we must return to the excavation undertaken in 1994 by the National Museum and Moesgård Museum inside Lisbjerg Church. As already mentioned, on that occasion a wooden predecessor to the present church was identified, but the archaeologists also found traces of an older building on the same spot. This house was interpreted as the main farmhouse. Other excavations of Viking Age farms have established that the main building had a central position, and that it was often provided with a special small fence (Fig. 6). It has been suggested that this area – the main farmhouse surrounded by a fence – may in fact be the “sheltered yard” mentioned in medieval laws from the time around 1200. Exactly what this term relates to is unknown today, but the fact that the old laws laid down punishments for any assault within this area shows that the “sheltered yard” had a special status.

Waste pits found in the southern part of the excavation threw light on the activities that took place within the large yard (see Fig. 3). Pit AW was especially interesting, as it contained waste from metal crafts such as iron processing, bronze and silver casting, and glass making. This material has been analysed by Arne Jouttijärvi of Heimdal-archaeometry.

The analyses show that around half the iron is of Danish origin, whereas the rest is imported. Waste from iron purification dominates the material, but there is also evidence of forging and welding, and so all the steps of a blacksmith’s work are represented.

The waste from other metal crafts includes fragments of crucibles and moulds, and drops of bronze. There are fragments from several crucibles (Fig. 7), three of which contained metal remnants, in each case silver, except for one drop containing both silver and gold. Analyses of the other drops, however, showed no precious metals, just copper and bronze. A strange, oblong, almost boat-shaped crucible (?) contained the uncommon alloy of antimony bronze, a material characterized by its hardness. Only one other example of antimony bronze is known from the Viking Age, a piece of 10th century scrap metal found at Netherton in England. The crucible fragments amounted to around 100 pieces (Fig. 8). Analyses of these showed no evident metal remnants. The relatively poor occurrence of metal traces in both crucibles and moulds indicate that they were used for silver casting.

The pit also contained a couple of minor bronze items (Fig. 9). One is a fragment of a plate with ring ornaments. It has been riveted onto some organic material, probably leather. The other piece also seems to have been used for decoration. It is a pyramid-shaped object with an unusually high tin content (22% as opposed to the normal 5-12% for bronze).

A total of eight “glass pieces” and two bead fragments and a glass ball from pit AW were analysed. Four clear and faintly green glass pieces were all sodium glass. One fragment of a layered bead created from yellow and green glass is also made from sodium glass. Following the collapse of the Roman Empire, glass of this type is thought to stem from the melting of Roman glass items. Viking Age sodium glass is primarily known from beakers found in England and Scandinavia. Most likely, the production of sodium glass continued to some extent in Byzantium, but Byzantine glass usually has a higher content of magnesium oxide (MgO). This particular glass of Eastern origin was identified in a blue glass ball. The glass ball in question (Fig. 10) has a diameter of a little less than two centimetres, and is made from clear greenish glass. The analysis showed that we are dealing with a very special type of glass with low sodium (Na2O) and potash (K2O) contents, but a rather large content of magnesium oxide (MgO). This glass type is unknown in the reference material used by Heimdal-archaeometry, which comprises 3000 analyses. Four reddish-brown “glass fragments” turned out to be garnet. The pottery finds from pit AW are all of Viking type pottery (Fig. 11-12).

Pits AT and BA near AW contained iron slag. Pit J may also be connected to the Viking Age farm, as it contained a piece of pottery of the west Slav pottery type so popular in the Viking Age (Fig. 13).

Earlier, it has been pointed out that the Viking Age farm may have had a special status. Not only was it involved in the first building of a church here; it also had an important situation within the main settle­ment of the district. As for traffic, Lis­bjerg had a strategically favourable position at the time, as it was situated close to the main north-south road in eastern Jutland. It is thus tempting to conclude that the large fenced-in farm was the local administration centre. A recent find may support this theory: in connection with the archaeological excavations of the planned motorway between Søften and Skødstrup, a moat running along the Egå River – the old district border – was identified in the valley just below Lisbjerg (Fig. 14). The 2-m wide and 1.5-m deep moat was followed across an almost two-kilometre long stretch (Fig. 15). There has thus been a very substantial blockade running across the old road to Lisbjerg (Fig. 16). The length of the moat points towards it being used to reinforce the traffic control by forcing travellers to use the river crossing just below Lisbjerg. The archaeologists did not succeed in dating the moat, but since its construction must have been a very significant undertaking it is tempting to connect it with the powerful Viking magnate residing on the Lisbjerg farm. 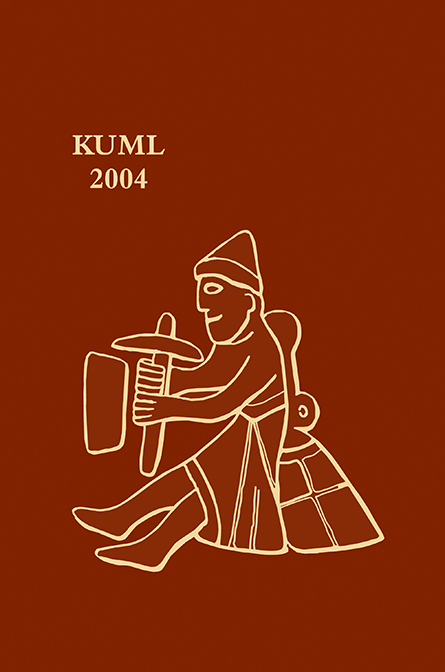