Fields and pottery kilns at Filsø

In 1962, the Museum of Esbjerg investigated the remains of a 12th-century house on sill stones, built on top of a “ridge and furrow” field (Fig. 1). The whole area was covered by half a metre of shifting sand, which had preserved the layers well. A planned continuation of the excavation was abandoned. However, in 1982, the author of the article made a complementary investigation of the house and the fields. The terrain was later contour surveyed, and in 1991, the ‘Museet for Varde By og Omegn’ museum undertook another investigation. The main issue was to investigate the width of the ridges across which the house with the stone sill had been built, and to establish whether they were connected to possible ridges south of the house. A 70 m long and 1.2 m wide northsouth orientated trial trench was therefore laid out west of the old excavated site, with which it was connected by two further trenches. The intention was to gain one long section through all the fields (Figs. 2 and 3).

The investigation showed that the fields underneath the house consisted of one ridge and a half, with a width of 14.4 m and 7.2 m respectively, or the equivalent of 12 fathoms of the time, possibly the same as half a yardland (Figs. 4 and 5).

The ridges and furrows at Filsø represent the fusion of two separate elements; one being the growing of winter crops on narrow ridges in small areas, the other being the regulated fields, or furlongs, which were created by dividing the open village fields. The plough has been improved, and the furlong can be ploughed into a ridge. This made it possible to grow winter rye to a much larger extent than before, as the cultivation could be moved to the village common.

North of the ridges, and parallel to them, was an area with traces from clay working, which was divided off by wall grooves or fences. The width of the area was the same as the width of the half ridge and furrow field adjoining it, which indicates that this area was laid out at the same time as the fields (Fig. 3).

The ridges were succeeded by the house with the stone sill, which was investigated in the 1960s and again in 1982 (Fig. 10). A pollen sample from a raw humus layer underneath the house showed that the fields were covered by heather before the house was built. The formation of the raw humus layer is assumed to have been created during approximately a century, which is thus the time the heath would have existed. The house shows signs of repairs, which indicates that it was used for many years. The remains of a padlock (Fig. 12) were found approximately two metres from the presumed entrance. The northsouth orientation of the house and the finds in its immediate proximity may indicate that it was a workshop or an outhouse.

On the same ridge, a site of a fire – perhaps from another house, although there is no definite basis for this interpretation – was situated some ten metres west of the above-mentioned site (Figs. 3 and 4). The only ornamented pottery fragment found during the investigation was situated in a layer of the burnt site (Fig. 11e).
South of the ridges, the shifting sand was expected to be hiding more ridges. It was thus a surprise when long rows of kilns with intact peat cappings were exposed, as well as an adjoining wheel track convenient for loading and unloading. The observations made here indicate that the kilns were used for firing pottery (Figs. 7, 8 and 9).

It looks as if the house on the stone sill and the kilns were contemporary, and the activities on the site were probably put to an end by the sand drift around 1200 AD. The pottery found around the kilns and inside and outside the house is of identical type (Fig. 11). It is almost entirely made up by hemispherical vessels dating from the second half of the12th century. The pottery material contains misfired pottery. In the furrow between the two ridges, a 3 cm thick layer of charcoal was layered directly on top of the cultivated soil (Fig. 6), and a sprig of heather from here has been dated using AMS dating of C14. The result of this dating, compared with the stratigraphic conditions and the dating of the pottery, points at the ridges being from the time between 1050 and 1080. The settlement was covered by sand and given up around 1200. However, the shifting sand did not completely prevent human activity on the site. The rim of an earthenware pot with a ledge for a lid was found on what is possibly an old surface roughly 10 cm further up in the sand layer (Fig. 11f). At another spot, about 10 cm underneath the top of the sand, a handful of white quartz beach stones had been left, almost as a last greeting (Fig. 13). 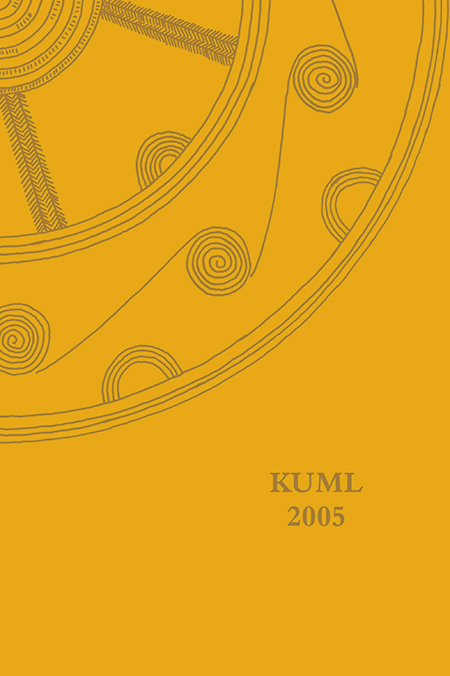