In 2007, a half-timbered house dating from 1574 was demolished in the centre of Aalborg. In advance of the subsequent construction project, the Historical Museum of Northern Jutland excavated a 135 m2 area at the site. The cultural layers were up to 4 m in thickness and the dating frame extended from the Viking Age to 1574. There proved to have been settlement on the site throughout this entire period, and one of the main results of the excavation was, consequently, a sequence of in all 19 buildings dating from the end of the 10th century to 1574.

The site represents one of the best assem­blages of urban buildings from the Viking Age and Middle Ages. The site was almost continually occupied by dwelling houses throughout the entire Middle Ages. The excavation findings therefore reflect developments in house morphology and internal organisation from the Viking Age until the early Renaissance. This article presents the excavation findings relating to the houses at the site.

The site was excavated stratigraphically and the excavated surface was recorded at 13 survey levels: The excavation plans presented in this article are digitalised, redrawn versions and interpretational levels. At one point, the excavation was very pressed for time and the houses from the period c. 1225-1350 in particular were affected by being excavated very rapidly. Machine excavation was, however, not employed.

For several of the earlier houses, up to two-thirds of the building lay within the excavation trench. It was therefore possible, in most cases, to investigate large parts of the houses’ floor areas, and thereby demonstrate their internal organisation and layout.

The preservation conditions for organ­ic material were good in the 4 m thick cultural layers at the site. Samples were therefore taken for dendrochronology from all suitable timbers and samples were taken for plant macro-remain analysis from the excavation sections.

Algade has been the main thoroughfare throughout Aalborg’s history, and the town grew up around this street. For most of the Middle Ages, Algade 9 was a neighbour to the town’s Franciscan monastery (fig. 1). The site’s relatively large houses, situated on one of the town’s most important streets, makes it likely that their occupants belonged to the wealthier part of Aalborg’s population. Several finds, from all levels, can also be considered as high-status objects. Further­more, the finds demonstrate contacts with an international trading ­environment, primarily in the form of imported ceramics, but also including other categories of finds.

The earliest dwelling houses at Algade 9 were built at the end of the 10th century. But they overlay earlier structures and features from the 8th and 9th centuries. From the end of the 10th century there is, accordingly, an almost unbroken series of habitations on the site, extending up to the present day (fig. 2). Of the 19 buildings, 17 were dwelling houses, with the two others being a byre and a smithy, respectively. The houses were primarily oriented with their north gable out ­towards Algade.

From the beginning of the 11th century there were two plots represented at the site, as the boundary was displaced c. 2 m to the east relative to the present-day cadastral boundary (fig. 3). In the mid-13th century, the western plot was turned over to a churchyard, probably belonging to Aalborg’s Franciscan monastery, which was founded in the 1240s. In the mid-14th century, the area was cleared and a brief period followed without dwelling houses on the site. During this short time span, byre A350 stood on the southern part of the plot (fig. 4). The monastery churchyard was also reduced. In general, a marked change took place in the structure of the plot, possibly the result of a brief reduction in population. The Black Death, or a famine resulting from the agri­cultural crisis of the 14th century, could have been the cause. Subsequently, it appears that the present plot division was re-established and gable houses were built on the site.

In the period c. 985-1075, five curved-walled longhouses stood on the site: A691, A584, A657, A625 and A578 (figs. 5, 15-17). Of the five houses, four were oriented north-south and not, as was the norm for this period, east-west. This is seen as a reflection of relatively dense settlement structure around these buildings. In the second half of the 11th century, houses became straight-walled, and during this period a curved-walled house and a straight-walled house stood side by side. This transition in the second half of the 11th century is also evident in Lund and Viborg.

The preserved timber and wood from the houses enables description of a number of constructional features. This ­applies in particular to the outer walls of the houses (fig. 6). There appears to have been two different constructional types. Houses A584 and A691 have had stave walls, set in wall ditches, while houses A756, A625 and A587 had bole-like constructions. In the latter, the wall posts can be considered as double posts, because they consisted of two posts positioned closely together. The horizontal timbers occupying the spaces in between comprised cloven tree trunks with no further working. Their ends were though cut obliquely so they could be inserted into the gaps between the double posts (fig. 7). Houses A625 and A756 had external, sloping buttress posts. The angle of these revealed wall heights of at least about 2 m. House A503, from the 12th century, also had external sloping buttress posts, but here the wall height proved to be less than 2 m.

Various tree species had been employed in the curved-walled houses: oak, alder and birch timbers were observed. There had been some reuse of timber, which saw expression in the very different ages of dated timbers taken from the same wall.

In houses A756, A625 and A578 an internal division could be perceived in the form of a relatively large central room, flanked by smaller rooms at the gables (fig. 8). The hearths were found to be situated in this central room. This internal division and relatively slight construction corresponds in many ways to similar houses excavated in Lund and Viborg. Basic­ally, these buildings can be perceived as variants of the so-called Trelleborg house. The date of this house type has previously been presented as c. 950-1050, something which the Algade 9 houses give no reason to adjust.

Houses A572, A504, A503, A452, A427, A428 and A376, which are dated to the period c. 1075-1350, had so many features in common that they probably represent a specific house type (figs. 17-21). The side walls were straight on all these buildings. They had three rooms, of which probably only the two northernmost ones, towards Algade, constituted living quarters. The rooms were connected by an internal door. The southerly, rearmost rooms were of unknown function. There was probably not internal access from the middle to the southern room (fig. 9).

The most striking common feature of the houses was that they had a jamb stove, which projected into the middle room of the building, but was fired from the northern room (figs. 10-11). Jamb stoves were observed in houses A504, A452, A427, A428 and A376. All the other hearths and fireplaces were in the room to the north too. The middle room had therefore offered a comfortable and smoke-free environment. It was of a more private character, because the only access was via the northern room. The jamb stoves found in the houses were all made according to the same pattern: A rectangular clay construction with an internal layer of stones immediately below the actual working surface. The stove cupula was then built up over a skeleton of withies that were pushed into the stove base.

On the basis of the findings from the Algade 9 excavation, the above house type has been identified at other sites in Aalborg and is very similar to some coeval houses excavated in Viborg. The evidence suggests that this was a common type of urban house in northern Jutland during the first half of the Middle Ages.

The latest houses on the plot, A221, A71 and A55, were probably half-timbered buildings, like the demolished house A100 (figs. 22-26). The houses were built using sill (foundation) stones and the latest had decayed traces of sill beams. In house A221, the sill was possibly founded using piles that were mortised into the sill beam’s lower surface (fig. 12).

Houses A221 and A55 both had a cellar below their southern part. They were built of wood and had cobbled floors (fig. 13). A possible parallel to these houses with cellars is Grønnegade 12 in Ribe: This had a room over the cellar which functioned as a living room or hostel. The latter could also have been the case with the houses at Algade 9. The demolished house A100 from 1574 also had a cellar, but this was in the northern part of the building, out towards Algade.

There is evidence to suggest that houses A221 and A55 had an internal organisation, which corresponded to a northern Jutland pattern seen in several gable houses from the 16th century in Jutland. This type of internal organisation is characterised by very few rooms and the room out towards the street functioning as the entrance hall/anteroom. The kitchen hearth was in the living room behind this anteroom. In houses A221 and A55 at Algade 9 there were no definite traces of dividing walls between the two foremost rooms. But there were hearths in both houses in what was probably the second room in from the street (fig. 14). Fragments of tiles from a tiled stove were found in these two houses. From the results of several other excavations in Aalborg, it can be seen that the northern Jutland layout was probably common in the town as early as the end of the 14th century.

The almost continual occupation of the site over such a prolonged period provides an insight into developments in the building stock on a plot in the centre of a Medieval market town. It can be debated how representative this development is, but parallels have been presented which suggest that, when it comes to the internal layout of the houses, types are present that can possibly be recognised in other parts of Denmark. Consequently, these houses may perhaps represent general patterns in housing for ordinary tradesmen and merchants through the Middle Ages. The main aim here, however, has been to present the excavation findings and thereby create a foundation for these comparisons. At the time of the excavation in 2007 there was a lack of published information on Medieval houses that could help us to understand the excavated building remains. The present article is an attempt to redress this situation. 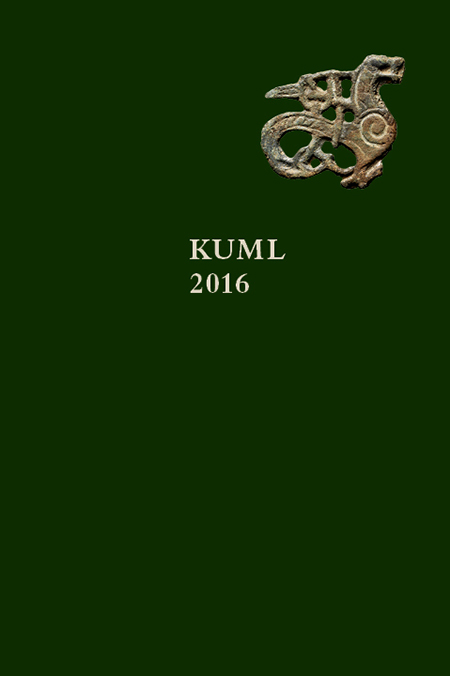