Belief, hope and love
The symbolism of medieval ring brooches

Ornaments and costume accessories have always been worn for decorative and functional reasons as well as for signalling status etc. However, they have also often been ascribed properties by virtue of their form and decoration – properties which would aid or protect the wearer. A belief in the inherent power of objects was a part of the world view during the Middle Ages. Medieval lapidaries contain descriptions of the properties or virtues that were ascribed to metals, precious and semi-precious stones and other geological materials. These properties constituted for example the ability to cure particular illnesses, impart spiritual insight, bring fortune in the matters of the heart and confer protection when travelling. In addition to the powers resident within the various materials, decoration has also played a major role. Inscriptions were common and were deemed very efficacious. Furthermore, shape, geometric figures and numerical symbolism could also have played a role which is, however, more difficult to decipher today.

This article focuses on the ring brooches that were employed as costume accessories in Europe between the 12th and 15th centuries, and which were especially popular during the 13th and 14th centuries. In the High Middle Ages, in particular, three themes dominated the symbolism of the ornaments, i.e. religion, magic and love. The religious aspect saw expression in the form of inscriptions or images showing the worship of holy men and women (figs. 2-5). A second kind of symbolism is that which can be termed magical. This is most clearly seen as inscriptions in the form of anagrams or illegible words (fig. 6). It seems likely that materials such as metals or stone were attributed magical properties relative to ring brooches, but this is difficult to prove today (fig. 7). It is obvious to imagine that the actual form of the “ring” or frame of the brooches, for example as stars or quatrefoils, had a significance over and above the purely decorative (figs. 3 & 8). Especially so, when a comparison is made with brooches where the form of the frame has an undoubted romantic symbolism, which we readily recognise today (figs. 2a, 4, 10, 11). These symbols, i.e. hearts and clasped hands, together with a series of inscriptions, bear witness to the fact that ring brooches, on a par with finger rings, were used as tokens of love (fig. 1). The amorous inscriptions speak directly to us of relations between people (fig. 7). The romantic inscriptions of the French court, of which there is one Danish example, are especially refined (fig. 9).

These three themes are not clearly delimited and often merge together. It seems likely that the mingling of, for example, religious and magical inscriptions took place with the intentional aim of creating a special or more powerful effect. Ring brooches with symbolic expression occur in a wide range of qualities, from valuable examples of gold and silver to mass-produced brooches of cheaper metal alloys (figs. 4 & 10). This demonstrates that the symbolism was familiar and widespread in a very broad social sense. The symbolism seen on ring brooches and other types of ornaments from the Middle Ages is, in many instances, a direct expression of feelings, belief and hope and constitutes a fascinating source relative the medieval secular world. 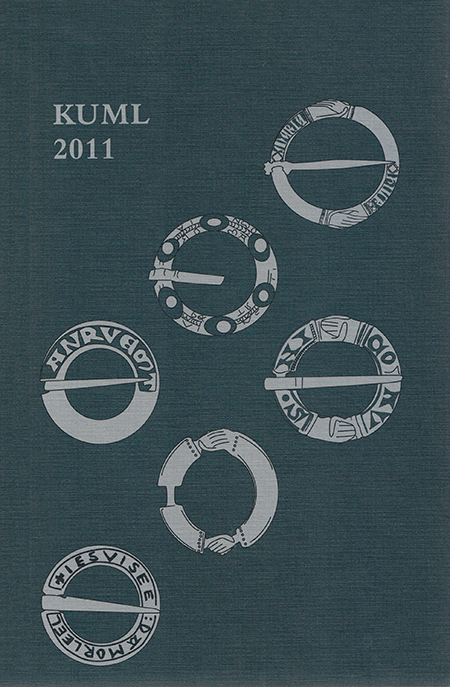