Bronze Age metalwork (primarily swords and other weapons) found in European rivers has aroused interest for many years, but little is known of corresponding finds from Denmark. The general Scandinavian tradition of offering differs in that it is associated more with bogs and wetlands than with rivers. This article examines the relevant records from Denmark’s longest river, the Gudenå, and adjacent areas, dating from the Late Neolithic, Bronze Age and Early Pre-Roman Iron Age. Remarkably, it turns out that there are significantly more Bronze Age river finds from the Gudenå itself (38 in all) than was previously realised. Consequently, the Gudenå finds stand out relative to the Scandinavian votive tradition. This phenomenon forges links with the far-reaching European tradition of offering metal objects in rivers and new insights add depth and detail to the overall picture of offering traditions in southern Scandinavia and put these finds into a landscape-archaeological perspective.

The Gudenå is Denmark’s longest river, with its total length of river including Randers Fjord being c. 160 km. (fig. 1). Given its width and depth, it is the only Danish watercourse to achieve the status of an actual river. The religious name ‘Gudenå’ is one of the oldest names associated with a Danish watercourse. The name ‘Guden’ is its original name, found in documentary sources extending back to the Early Middle Ages, and should probably be understood in the sense of ‘consecrated to the gods’. The precise age of the name is uncertain, but according to place-name researchers a large proportion of the old uncompounded names originate from the 1st millennium AD – and some are even older.

A particular stretch of the Gudenå, extending for about 20 km from Tange through Bjerringbro to Ulstrup, has a remarkable concentration of river finds, and is especially striking between Tange and Bjerringbro (fig. 2). The finds from this section of river are surprising in terms of the number of Bronze Age artefacts, especially daggers and swords, represented among them. Chronologically, they cover the entire Bronze Age, but with an emphasis on the earliest part of the period. In general, the majority of South Scandinavian depositions date from the Late Bronze Age, with bogs and wetland areas being the sites most used for these. However, this picture is challenged by the evidence from the Gudenå which – due to relatively numerous finds from the Early Bronze Age and single finds of weapons and tools in water – differs fundamentally from the general picture. Furthermore, the finds from the Gudenå reflect a common European view that swords, daggers and spears were the primary objects associated with deposition in rivers.

Chronologically, depositions from the Bronze Age (c. 1700 500 BC) constitute the primary focus of the study, but finds from the Late Neolithic (c. 2350 1700 BC) and Early Pre-Roman Iron Age (c. 500 200 BC) are also included (figs. 3a-d). The main emphasis is on the river finds. However, in geographical terms, not only actual river finds have been included, but also depositions recorded within a distance of c. 1 km from the river on both sides.

This study encompasses a total of 112 finds: 38 river finds, 30 from fields/meadows, 27 from bogs and two from marl pits. Further to these are 15 finds for which there is no information on their find context (figs. 4 and 5).

Various circumstances are important with respect to the representativity of the finds from around Tange, Bjerringbro and Ulstrup. One important explanation for the many records is linked to the construction of a large hydro-electric power plant at Tange in 1921. Huge volumes of earth were moved in its construction (fig. 6) and a good number of archaeological artefacts were found in the process. Another explanation relates to the activities of amateur archaeologists, especially Ulrik Balslev, who was particularly active in the area around Bjerringbro; no fewer than 15 of the finds in this study are from his collection (for example a Hallstatt sword, fig. 7). In recent years, the use of metal detectors has also had a significant effect with respect to the number of finds from the area.

Figure 8 shows all the single finds dating from the Late Neolithic. The most frequent river finds are flint daggers and sickles, of which some of the latter may also date from the Early Bronze Age. An uncultivated area of bog at Ulstrup near the Gudenå yielded two special bronze axes. These have flared edges and they show great similarity to Anglo-Irish ornamented bronze axes of the time (fig. 9). They are not identical in either decoration or form, but they must originally have belonged together, constituting a collective deposition.

In the Early Bronze Age, metal daggers are a prominent artefact group and, seen in the light of river finds of flint daggers from the Late Neolithic, they demonstrate a continuity of dagger deposition in certain parts of the Gudenå (figs. 10 and 11). A Fårdrup type axe was also found in the Gudenå (fig. 12).

In the Late Bronze Age there is a general increase in depositions in southern Scandinavia, culminating in period V (c. 900 700 BC). This general picture differs slightly from that of the Gudenå’s river finds, which reveals a preponderance of finds dating from the Early Bronze Age. Figure 13 shows the finds distribution for the Late Bronze Age. As can be seen, swords feature among the river-found artefacts and the more unusual of these include an example of each of the two rare, imported Hallstatt sword types, of which only six have been found to date in Denmark.

Figures 8, 10 and 13 show, respectively, the distribution of single finds from the Late Neolithic and the Early and Late Bronze Age. If the figures are compared, it becomes clear that there are slightly different finds distributions with respect to bog, field and river finds. For example, the river finds include a number of flint daggers, and the metal daggers of the Early Bronze Age come exclusively from the river. The swords and spears of the Early Bronze Age also include a number of river finds, whereas an artefact group such as the celts occurs more in field and bog finds than as river finds. Even though their total number is not very great, a similar situation is evident with respect to the Early Bronze Age flanged axes. In general, it can be said that these single depositions are dominated by artefacts from the male sphere.

The only Pre-Roman Iron Age finds recorded from the Gudenå in the finds-rich area around Bjerringbro are a bronze double-spiral fibula and a ring, and with these the river finds also come more or less to an end. There are though scattered finds of much later date associated with the river – including a Viking Age sword from the Randers area and a 16th century battle sword. These later finds underline the river’s continued significance as a locality for depositions further up in time and the remarkable continuity evident in the ancient votive traditions.

In a Danish context, the Gudenå stands out by being the country’s longest watercourse and by having a name that indicates a special significance. There are also scattered records of swords from other Danish watercourses, such as the Early Bronze Age period III example from Nørreå and a sword blade from period I found in Odense Å, but the finds from the Gudenå stand out by virtue of the striking concentration seen around Tange, Bjerringbro and Ulstrup. This section apparently had a special significance in a depositional context, whereby the river, partly by virtue of its size, invited the deposition of weapons in open water. If it is assumed that the distribution of finds largely reflects a prehistoric reality, it was along specific stretches of the Gudenå that people showed a particular predilection for deposition in water. This seems plausible as there were presumably considerable regional and local variations in depositional tradition during the Bronze Age – bound up to a very great extent with various local landscape features. In this respect, the variation shown by the Gudenå along its course is important. Specific sections could therefore very well have been chosen as a particularly suitable depositional landscape on the basis of special natural criteria. In the area around Tange and Bjerringbro, the Gudenå runs through a pronounced valley, flanked by terraces, which fixes the river solidly in the landscape and this could have been significant with respect to the intensity of deposition seen here. The distribution of finds is also totally consistent with a clear tendency, in a European context, for depositions not to occur in all parts of a river or everywhere across a wetland area, but to be associated with particular zones or stretches.

A characteristic feature of several of the Late Neolithic and Bronze Age finds from the Gudenå is that they turned up at the confluence of two watercourses (fig. 14). In a European perspective, many river finds are also typically associated with fords, bridges and crossings and several Danish examples have similar find contexts. A number of finds from the Gudenå are associated with presumed crossings although, in several cases, this categorisation is based solely on the place name for the find relating to a bridge or ford, for example Lysbro (fig. 15).

The various find situations and characteristics relating to the choice of deposition site can either be assessed very locally, whereby each individual find site is examined in relation to water, crossings etc., or they can be evaluated collectively, as elements in the landscape at a greater geographic scale and, thereby, as components of a ritual landscape which may have existed over a longer period of time. The Tange, Bjerringbro and Ulstrup section of the river has both a concentration of river finds and also records from river-near areas of artefacts discovered in bogs and wetland areas. An appraisal of the natural environment along this stretch reveals a characteristic feature: The river runs through a distinctive valley flanked by terraces. Given the nature and distribution of the finds and the morphology of the landscape, the term ‘Heilig Tal’ can therefore be applied to the Tange, Bjerringbro and Ulstrup section of the Gudenå river valley. It is beyond the scope of this article to address grave and settlement remains associated with the river, but in the light of the concentration of finds and the area’s characteristic natural environment, it is interesting that it is generally rich archaeologically with several finds from the Late Bronze Age – including grave finds from some the area’s numerous barrows (fig. 16).

The Gudenå finds stand out from the Scandinavian votive tradition as exemplified by the river finds of daggers. And while these finds display clear points of similarity with the river finds associated with the European tradition, there are also differences, because the relatively numerous Early Bronze Age artefacts from the Gudenå also confer a special individual character on the finds. In any case, the Bronze Age finds from the Gudenå provide an interesting example of how special depositional traditions can arise in particular areas, while otherwise only making a very slight impact in other places within the Nordic Bronze Age culture. 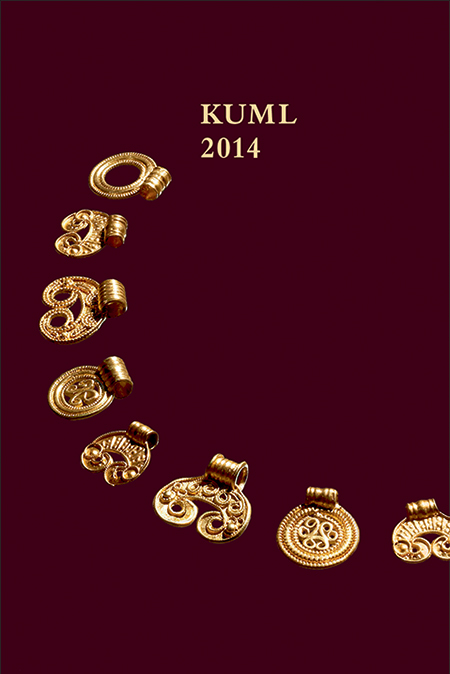