The author describes some reconstruction experiments which were made in 1956, 1957 and 1958 near the village of Allerslev, near Roskilde, Zeeland. An attempt was made to re-erect some houses found on a site called "Troldebjerg" in the neighbourhood of Rudkøbing, Langeland, at the end of the 'thirties', and excavated by Mr. Jens Winther of that town. Several houses, a score or so of "apse-shaped" huts and: a single rectangular house were excavated. The settlement was dated to about 2200 B.C., and gave valuable information on the appearance of dwelling houses of the middle Neolithic period owing to the fine state of preservation. The information culled on this occasion must, however, be treated with some caution, as the houses were discovered at a period when the excavation technique of remains of dwellings in Danish settlements was only in its beginnings.

This, together with a yet more important fact, viz. that so little of these dwellings had been preserved at all, made the correct appearance of the houses a problem exceedingly difficult to solve.

In 1956 there was only one approach possible: to start on the long apprenticeship which was a necessary preliminary before any experience could be gained. This method has been the fundamental principle on which all the experiments have been based; a deeper comprehension of prehistoric building methods has been attained by the rejection or confirmation of theory by practical experiment.

A series of observations then follows, a result of the knowledge acquired from the work of reconstruction of the first five years.

The construction of the walls and their subsequent, gradual decay as a result of the weather must be specially mentioned.

The walls were borne by wall posts which were either supported by stones placed in a trench or were dug down in holes. Osier wattling was then made up to the top of the wall and, although the posts were not sunk particularly deep in the earth, they supported the wattling sufficiently to bear the nine tons of clay employed to cover the wattling inside and out.

After drying for some days, the wall cracked, but showed no sign of weakness. While the plastering was in progress, all sorts of objects lying near the great mound of clay were mixed in and plastered on the wall. The clay was kneaded with bare legs and feet and mixed to a suitable consistency with hay and water.

Figs VI and VII show plastering in progress on the reconstructed part of the above mentioned rectangular house from Troldebjerg.

In 1960, the houses were measured to see how much of the outer walls had been worn away by exposure. Figs. IX, X, III, IV and V are extracts of these measurements. On the whole, the mud-plastered, but unprotected, walls were not so much damaged by rain as by the damp which during the winter rose through the ground sill and, in frosty periods, loosened the mud­plastering on both the inside and the outside of the walls. Only in places where a row of stones prevented this damp from penetrating up to half a metre up the wall did the foot of the wall remain intact.

This "sliding out" formed a cone all along the wall which is very characteristic of this type of wall, and which is far greater than would have been the case if the wall in its entirety had been exposed to rain alone. Figs. IV and V are measurements of the same part of the wall as shown in fig. VII. Although these measurements seem to be of a wall that is practically destroyed, this is actually not at all the case. The rain erosion apparently ceases at the top of the wattling-the inner side of the wall is hard and firm. Need one plaster the inside only? It would save four tons of clay.

In the summer of 1958 the rectangular house burnt down. This came about through care­lessness while lighting a fire on the house's hearth. With the exception of the osiers inside the clay wall, which remained standing upright, practically all the woodwork was charred. The fire gave, however, an opportunity of examining a house that was lashed together before and after a fire. The measurement, fig. XII, is of the site immediately after the fire had burnt itself out.

In spite of the great heat, engendered by the flames (in places near a hay-stack it burnt for up to six hours), the clay wall was surprisingly little baked through. After the fire, it was, on the inner side, heavily reddened and blackened, but only in a layer that was c. ½ cm thick and which fairly quickly (in ahout 2 weeks) flaked off. It was only at the top, and at places that had been especially severely exposed to the heat, that the clay was practically baked through, and large pieces of mud-plastering similar to those originally discovered on the "genuine" site, could he broken off.

With a few exceptions, the roofing could be traced on the clay floor. Posts and beams were transformed in the course of a few hours by the freshly blowing wind into thin stripes of grey ash. The tops of the roof-supporting posts had been ablaze, but had crashed down fairly soon when they were burnt at their base by the fallen roof.

The slight damage to the walls is remarkable, as is also the slight thickness of the roof ash, but this may be due to the deflection of the wind.

The sites at Troldebjerg seem to indicate that the houses had been asymmetrical. A low hill slope has been utilized as the back wall and a high wall was only raised towards the village street and the surrounding bog. In reconstructing the houses this form was followed and posts and walls were placed in accordance with their original positions, Jens Winther's measurements being laid out on the ground in their full size.

After the fire in 1958, the rectangular house was reconstructed. This time, however, it was built too high, with too great a discrepancy in the proportions. In the years that followed, owing to the pressure of the sloping roof, it began to cave in against the wall. This proves, more than anything else, how speedily and indisputably the practical method can, in certain cases, teach us that reconstruction drafts must he treated with caution.

Neither nails nor pegs were used in assembling the houses. Everything was lashed together, in this case with elm hark. Elm hark is an excellent binding material when, after the cork layer has been removed, it is cut into suitable strips and kept moist until use.

On fig. 11 some of the types of bindings employed are seen. They are very simple and they preclude the danger of other methods, of a possibly later date, having been employed that would have marred the approximately true appearance of the reconstruction.

It is difficult to form any idea of the appearance of the gables of the houses (fig. XI). As some solution to this problem had to be found if the experiment was to be brought to a final conclusion, the type of gable illustrated here was used. Instead of hay matting, gables may have been filled up with turf. Fig. Ib shows the gables of the apse house and of the eldest house.

A few experiments were made near the houses in firing clay pots in charcoal slacks and in open fires. The sherds from the numerous unsuccessful clay pots were spread on the floors of the houses. As they all disappeared, they had evidently either disintegrated in the dampness or had been removed by visitors as souvenirs. A later excavation of the floor of one of the houses brought them to light again sunk beneath the surface. Paving-stones, hearth-stones and bits of charcoal are swamped in the same way as earth is dragged in through the doorway. It is, thus, possible for the sherds not to be crushed completely by the tramping of feet on the floor.

One would imagine that the interior of the house would become completely filled with smoke when a fire was burning. It was speedily discovered, however, that when the fire was under control, the smoke, though it filled the room, never sank beneath 1½ to 2 m above the level of the floor. At this height it circulated up and down a few times, after which it either found egress through the smoke-hole or through the entire roof. It never took the form of the slim wisp of smoke always seen in drawings of pre-historic dwellings.

Apart from the possible scientific value of this reconstruction, its value as a museum is really considerable. This is proved by the large numbers of visitors and especially by the classes of school children who, here, have been told about their forefathers. The cracked and scarred mudwalls and the cooked, gloomy houses smelling inside of hay and clay, must have stirred their imagination. 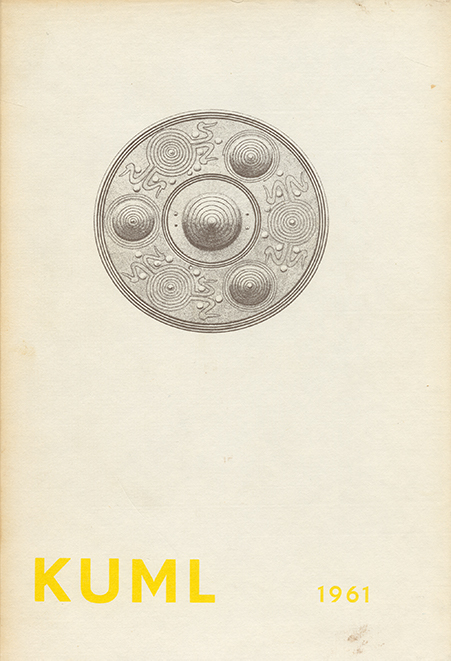