Cellar and House in the Roman Iron Age.

In the autumn of 1954 traces of a burnt-down village of Early Roman lron Age date were found at Sjælborg, about 12 kms. northwest of Esbjerg. Of the at least 7 house-sites which were identified, one was particularly well preserved, and the investigation of this house and the surrounding area gave results which are worthy of record.

The house lay east-west, was about 21 metres long, and was laid out traditionally with two rows of free-standing posts to bear the framework of the roof, each row containing 11 posts. The outer walls stood about one metre from the posts, and consisted of vertical beams with wattling and clay plastering. The two side walls were slightly curved, the width of the house varying from about 5 metres in the centre to somewhat over 3 metres at the ends.

There were two entrances, to the north and the south, placed approximately in the centre of the house, at the point of greatest width. In addition, postholes with charred remains of posts were found sited in such a way that there must have been beehive-shaped outbuildings built onto the house walls and roof.

The curved side walls recall the "Trælleborg house-type", which dates to a thousand years later. But, even though curved walls have been identified at Trælborg near Veerst in Jutland in a house which could be dated to about 400-600 AD, it would be reasonable to regard the shape of the Sjælborg house as being an unplanned irregularity, until such time as other discoveries may suggest the reverse. lron-Age houses are often quite considerably irregular in shape.

The stock quarters in the east end of the house are remarkable in being paved. Paved stock quarters are a south-west Jutland phenomenon, known up to the present only in four cases (Kjærsing, Vognsbøl, Boldesager and Sjælborg). They are not absolutely identical in layout, but a characteristic common to them all is the sunk manure-gutter, which clearly bore the urine out to a depression from which it could soak into the ground.

Channels dug from the roof-posts out to the walls showed that the stock quarters were divided up by solid partitions into 12 stalls, each of which doubtless contained two animals.

To the east of the paved stock quarters lay a room, 3 metres long, the purpose of which could not be determined. A similar room was found at the end of the paved stock quarters at Boldesager, which also dated to the Early Roman lron Age, as well as in a house from the Germanic lron Age in Oxbøl, excavated by Gudmund Hatt. Otherwise these small rooms are unknown on Danish lron-Age sites.

The living-room in the west end of the house was 7 metres long. The floor was of clay, with a stone-set hearth in the centre, while a stone mortar was found in the southwestern corner of the room. Several heaps of potsherds were found on the floor, and a large number of these could he assembled to form whole vessels. This pottery, which dates the house to the first century AD, showed several remarkable types, including several variants of the hollow "fire­dog" which is known in Jutland, and in particular in the area of Esbjerg.

Close to the northeast corner of the house a rectangular hole had been dug, to a depth of about 175 cms., with almost vertical sides. It measured 240 by 160 cms. at the bottom, and access was given by a sloping entrance from the east. At the southern side, immediately besides the house, there was a stepped excavation, the purpose of which is unknown. Four postholes approximately at the corners of this hole may have borne a saddle-roof above the hole, which must then he interpreted as a store-cellar. On the floor of the cellar were found 3 large pottery vessels and a smaller dish, all contemporary with the pottery found in the house.

The Roman historian, Cornelius Tacitus, described in the year 98 AD the life and customs of the Germans. Speaking of the houses of the Germans he tells how they dug holes under the ground, as places of refuge and as storerooms for agricultural produce. The Sjælborg cellar is the first discovery in Denmark to give a clear confirmation of Tacitus's report.

Traces of prehistoric ploughing were also found, reddish grooves being identified crossing in more than one direction the greyish layer of sandy soil which composed the surface of the settlement site previous to the fire. The actual site of the burning had clearly been ploughed, after the burnt houses had been levelled. This is probably the latest occurrence of ard-grooves yet identified. It would be natural to look for a connection between these ard-traces and the many occurrences of lynchets in the immediate neighbourhood of the settlement (Kraunse, Sønderhede, Kokspang, Marbæk, Sjælborg and Hjerting). 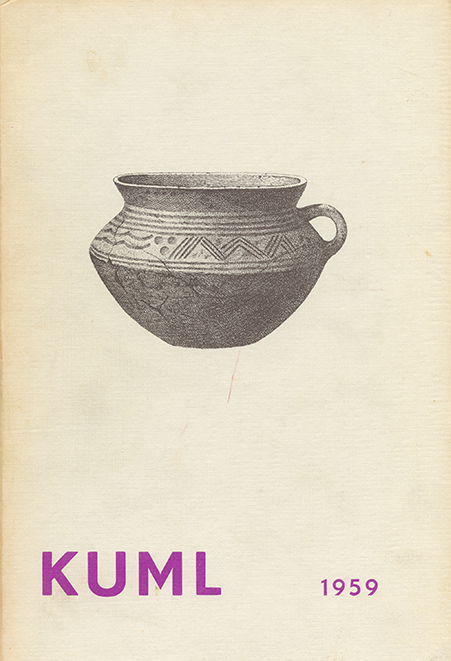