Votive Finds from the End of the Bronze-Age.

In 1954 the Prehistoric Museum received a bronze Hallstatt sword, in good condition and now 76.5 cms. long. It is close to the Mindelheim type, but possesses, instead of ribs, a smooth blade with a central ridge. It was found on the bank of the Gudenaa, near Bjerringbro. The next year Randers Museum received a sword of Gündlingen type, now 70.5 cms. long. It was found at Kalhovegaard near Randers.

The Hallstatt swords discovered in Scandinavia can only on rare occasions be dated within the Scandinavian chronological framework, the Swedish specimen from Långsjön (according to Cowen 'a northern variant') perhaps to Period V5), and the Mindelheim sword from Holbæk Ladegaard to Period Vl4). Discoveries of other types, however, aid in the dating. A burial at Voldtofte 7) dates the beginning of Hallstatt I to some time within Period V, and the discovery at Szembzin in Mecklenburg 9), from the transition from Period VI to Iron Age I, contained late Hallstatt II fibulae. The Scandinavian Period VI thus covers the greater part of the Hallstatt Period. The Hallstatt swords found out of context cannot be dated more closely in Scan­dinavia than to late Period V - early Period VI.

While the influence of Hallstatt I, and its imports, are fairly well represented in the Scandinavian discoveries, types which show connection with Hallstatt II are rare. In Bavaria pins with a double spiral head belong to early Hallstatt II 11), and they are apparently late in northern Europe (Szembzin). An isolated Navicella fibula from Iller Heath in Viborg County (Fig. 3) may belong to early Hallstatt II. The pair of fibulae from Ulfbjerg are copies of Certosa fibulae from Hallstatt II. This diminution in the number of discoveries can scarcely be ascribed to a severing of contacts between Scandinavia and central Europe; it can be explained by the nature of the discoveries made in Scandinavia, the continually poorer furnishings of the graves, and changes in the nature and composition of votive offerings.

Offerings consisting of weapons are throughout the Later Bronze Age less frequent than those consisting of ornaments, and they appear to cease altogether comparatively suddenly with the depositing of the Hallstatt swords in Period V-VI. Offerings of mixed ornaments are succeeded in the course of Period VI by offerings consisting of a pair of torques. This group of discoveries does not contain torque-types which have survived from Period V, but on the contrary contain some types, such as Broholm's "torques with chin clasp"16), which are unknown in the mixed offerings. The unmixed torque offerings are thus partly later than the mixed offerings, and commence at a time when the Wendel torques with thin laminations are just about going out of use. In the depot from Mejlstrupgaard 22), which must be dated by its iron pins with domed bronze heads to the transition between Period VI and the Iron Age, the massive Wendel torque must be ascribed to the end of Period VI. The "torques with chin clasp" derived from this type and common in the torque offerings must then be dated to Iron Age I, a date which would also appear to cover certain rarer torque types.

The deities to which the torques and the mixed ornaments respectively were offered are presumably those represented, partly in the figurines from Viksø, Farø, etc. 24), and partly in the female figurine from the Faardal discovery, which is normally regarded as associated with the snake in the same discovery. This group occurs again on the razor from Vestrup (Fig. 4), where the woman leads the snake on a leash behind her. On the same razor can be seen a pair of horned figures, the same figures as those of which one survives from the discovery at Grevensvænge 29). These latter are perhaps the deities for which the offerings of weapons were intended. It can still not be stated with certainty whether the offerings of weapons and those of mixed ornaments disappear simultaneously in Period VI, or whether the ornament offerings continue a little longer, before they are replaced by the offerings of torques alone. But the objects discovered mirror thoroughgoing changes, in the course of which the goddess of the torque offerings supplants the older deities of the Bronze Age. 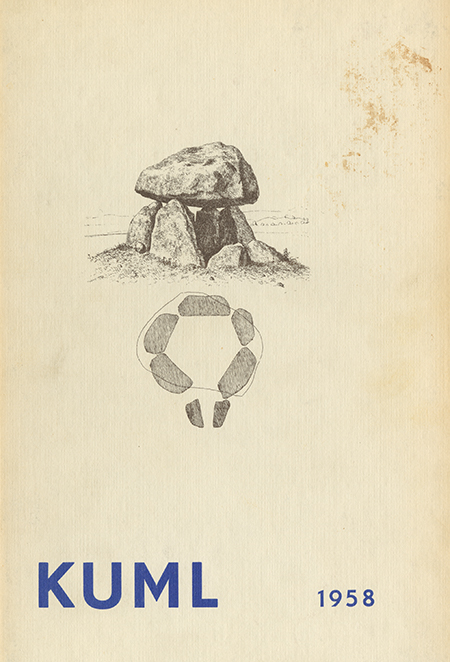