Façades and Functions Sigurd Frosterus as a Critic of Architecture

Alongside his work as a practising architect, Sigurd Frosterus (1876–1956) was one of Finland’s leading architectural critics during the first decades of the 20th century. In his early life, Frosterus was a strict rationalist who wanted to develop architecture towards scientific ideals instead of historical, archaeological, or mythological approaches. According to him, an architect had to analyse his tasks of construction in order to be able to logically justify his solutions, and he must take advantage of the possibilities of the latest technology. The particular challenge of his time was reinforced concrete. Frosterus considered that the buildings of a modern metropolis should be constructivist in expressing their purpose and technology honestly. The impulses of two famous European architects – Otto Wagner and Henry van de Velde – had a life-long influence on his work. Urban architecture with long street perspectives and houses with austere façades and unified eaves lines was the stylistic ideal that he shared with the Austrian architect Wagner. An open and enlightened urban experience was Frosterus’s future vision, not National Romantic capriciousness or intimacy drawing from the Middle Ages. According to Frosterus, the Belgian van de Velde was the master interior architect of the epoch, the interior of the Nietzsche Archives in Weimar being an excellent example of his work. However, already in the 1910s Frosterus’s rationalism developed towards a broader understanding of the functions of the façades of business edifices. In his brilliant analyses of the business palaces by the Finnish architects Armas Lindgren and Lars Sonck, he considered the symbolic and artistic values of the façades to be even more important than technological honesty. Moreover, references to the history of architecture had a crucial role in the 1920s and 1930s when he wrote about his main work– the Stockmann department store in the centre of Helsinki. 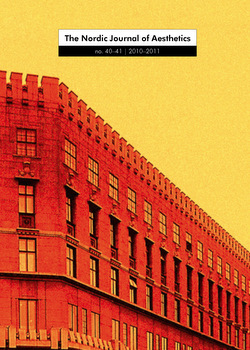